Have you died yet?

Joh 12:24 Verily, verily, I say unto you, Except a grain of wheat fall into the earth and die, it abideth by itself alone; but if it die, it beareth much fruit.

I find this scripture to be intriging and yet simple. The translations bring out different emphasis but still the one truth remains. Let’s look at the amplified version and then the Literal translation of the Holy Bible version ( which translates it just as the Hebrew reads)

Joh 12:24 I assure you, most solemnly I tell you, Unless a grain of wheat falls into the earth and dies, it remains [just one grain; it never becomes more but lives] by itself alone. But if it dies, it produces many others and yields a rich harvest.

Joh 12:24 Truly, truly, I say to you, If the grain of wheat that falls into the earth does not die, it remains alone. But if it dies, it bears much fruit.

The first thing I want to look at is the value of “one”. It is only one grain that is being emphasized by Jesus. This helps us to look at this as individuals and not a group. Jesus knew in his dying that he would in return bring forth much fruit or many disciples. He had to die. So how does this affect us. Do we have to die? Yes and our first death is in being born again. We have to die and be born again to enter the Kindgom of heaven.

Second in the literal translation it says if the grain falls and does not die, it remains alone. Can it fall and not die? Is that possible? certainly if Jesus said it it must be possible but I believe this is an analogy so let’s see what he is really saying. If you fall in life and you feel like your life is over and yet you don’t turn to the one who can give you life you will remain alone. You’ll be lonely ,afraid , unhappy and without encouragement. But if you die you will become part of something greater than yourself…the body of Christ.

Third If it dies it bears much fruit! Because we are connected to Jesus in death and relate to His death we are fruit bearers, just like He became a bearer of fruit. The kingdom of God is not like this earthly government or kingdom . When we die we live, when we try and live our own way it ends in death. I like to say if you live once you die twice ( born in sin and eath and then die in your body) But if you die twice you live three times ( Born, born again and live in eternity). So I ask you? Have you died yet? 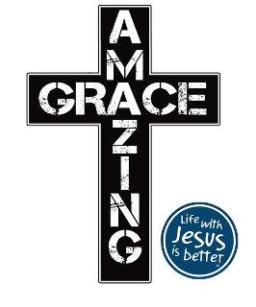 Eph 2:8 For it is by free grace (God’s unmerited favor) that you are saved (delivered from judgment and made partakers of Christ’s salvation) through [your] faith. And this [salvation] is not of yourselves [of your own doing, it came not through your own striving], but it is the gift of God;
Eph 2:9 Not because of works [not the fulfillment of the Law’s demands], lest any man should boast. [It is not the result of what anyone can possibly do, so no one can pride himself in it or take glory to himself.]
Eph 2:10 For we are God’s [own] handiwork (His workmanship), recreated in Christ Jesus, [born anew] that we may do those good works which God predestined (planned beforehand) for us [taking paths which He prepared ahead of time], that we should walk in them [living the good life which He prearranged and made ready for us to live].

When we look at this scripture we find a marvelous truth…Salvation is a free gift! We are saved not because of our own goodness or any good works we do but because of God’s free grace. That is why the song writer described it as Amazing Grace. We are then delivered from judgement and guilt and condemnation and made partakers of Jesus salvation. No one can earn it by works and thereby no one can boast. Sometimes when people experience this reality in the fullness of this statement, some would say wow then I can do what I want and it doesn’t matter. Nothing can be further from the truth. Paul experienced this in the book of Romans and this is what he said:
Rom 6:2 Certainly not! How can we who died to sin live in it any longer?
If you feel that way you didn’t read far enough. Verse 10 of Ephesians tells us thatwe are saved to do good works. God also planned them out for us to do! That why it is a relationship. You gotta spend time with Father God and Jesus so you can find out what you need to be doing. But now we are working not to be saved, that is guaranteed but to grow in him and actually be rewarded by him. So first of all Grace works so we don’t have to for salvation and because grace worked and offered us the free gift we have to receive it by faith. It is not automatic but available to all who believe…Hallelujah!So grace works first and then we work because of grace. Again that is why it is called amazing!